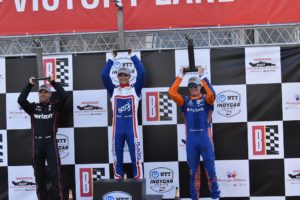 The marquee event of the weekend produced an unanticipated finish as Spaniard Alex Palou recorded the first victory of his career. It was his debut in the No. 10 Dallara-Honda for Chip Ganassi Racing, the team’s first win at Barber and its 114th in IndyCar.

END_OF_DOCUMENT_TOKEN_TO_BE_REPLACED