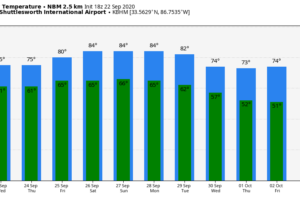 COOL SEPTEMBER DAY: The average high on September 22 at Birmingham is 83; temperatures are only in the upper 60s and low 70s across much of Alabama this afternoon. The sky is mostly cloudy, and we have seen a few sprinkles and patches of light rain around, especially on the western side of the state. The sky will stay generally cloudy tomorrow; a few showers are possible over West Alabama during the day, but rain becomes more likely statewide as the remnant circulation of former Tropical Storm Beta gets closer.